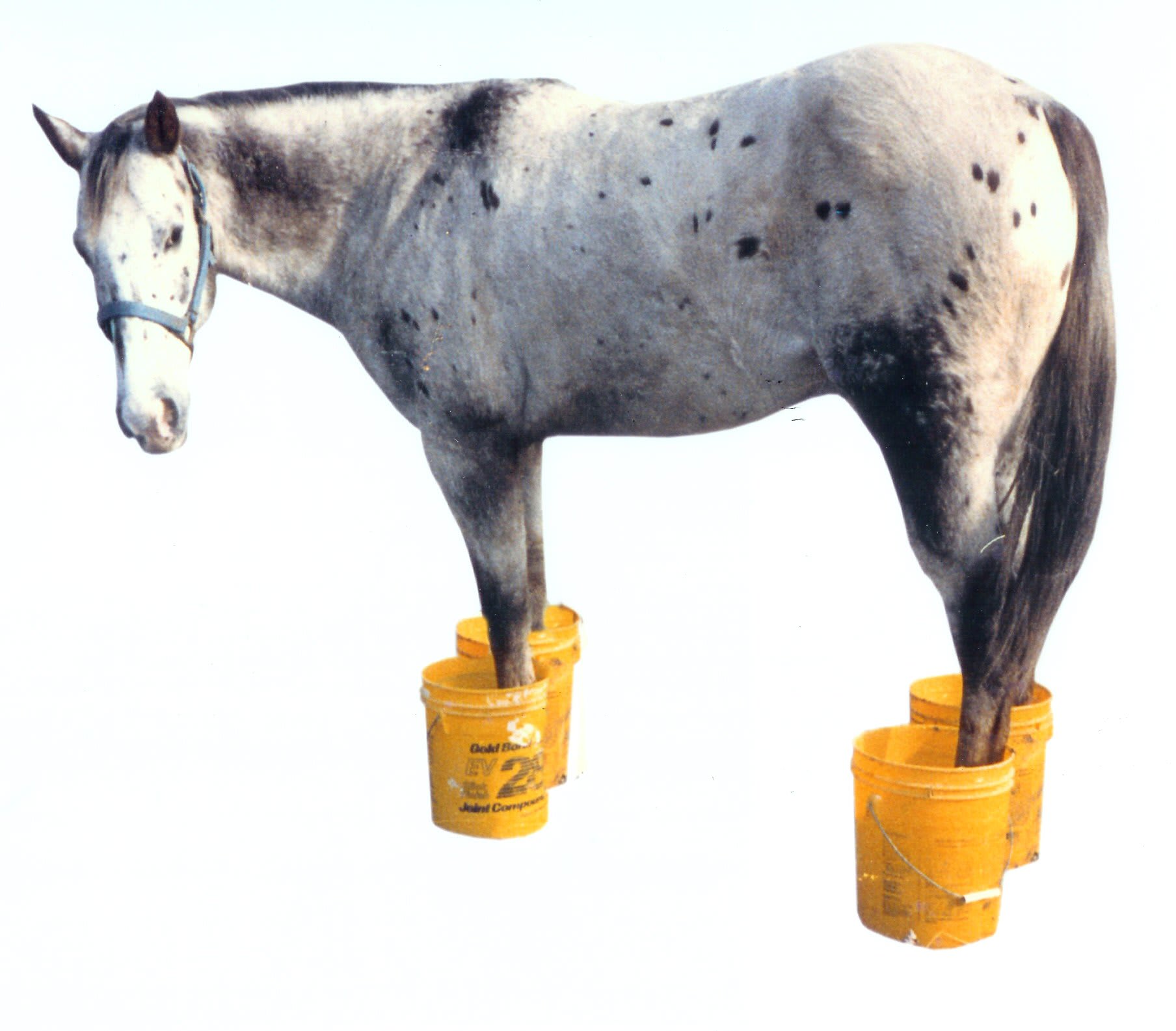 I started showing Rustler in Jr. Barrels in 1982 and was able to win 25+ High Point awards in Jr, Open, Ladies, & Senior Barrel Racing Classes up until 1989.  My office displays most of our trophies.}   Including winning Ladies Barrels for W.H.S.C. {Walnut Hill Saddle Club} & M.C.S.C. {Marion County Saddle Club} for six straight years 1984-1989.  In 1997 the I.W.H.S. & R.A {Illinois Western Horse Show & Racing Association} awarded a Certificate Of Achievement as Rustler was entered into the Speed Horse Hall of Fame for 1997&1998.

I was able to show Rustler twice in 1990 with winning a second & fifth place,
before mom called me at work on June 6, 1990, and said Rustler down and you need to get home now. Rustler never was able to get to his feet and we had to use a neighbors stock trailer to haul him to the U of I laying down in the trailer. After many test and hanging in straps to help him stand, we got the news he would never be able to stand on his own again. The nervous system has exploded. Since than I have read articles on nervous system disease that sounds like what took him way to soon in a hateful way. So on June 7, 1990 I had to make the decide that no horse owner ever wants to be faced with is ending your best friends life.
I bought and started another appy in the late 90's that was coming on very well until he pull suspensory ligament. This ended his running days. With raising kids I continued to training for other people as well as looking for a new barrel horse. I bought one in 2005, yes another Appaloosa "Cowboy". Raising kids and a bad marriage did not allow me the opportunity to show him, just lots of solid training. I was able to use him in riding lessons, clinic domos, and tons more. As my life changed I started more barrel training on him in 2009, but now my training of client horses kept me too busy to show until 2012. Late 2012 "Cowboy" started to have the "hunt" for the barrels and was starting to put the speed with it too. 2013 started off full speed running an awesome barrel pattern. And after years not running them I was like a kid in a candy store looking to hit the shows. Working hard I planned to show him in late May and was totally excited to be back in the barrel arena. But Disaster strikes again.... Cowboy was so nuts at the trailer I didn't even show him...Find out a few weeks later that he has Cataracts on both eyes at the young age of 9. This explains the bad behavior at a night show when he was unable to see his trailer buddy.

Now I'm starting over again and this time I am reworking our training program to focus on top quality horses for Barrel Racing & Pole Bending. Horsemanship By Respect, Inc. is going to be started 3-7yrs top breed horses on the barrels & poles then offer them for sale. These horses will have all the basic groundwork understood and quietly lope the pattern.

Update: Bought "Bar O' Dark Chocolate" 2011 Registered Appaloosa Gelding in December 2013. I saw a video and his pedigree online and new he was going to be my next Champion. After speaking with his owner he was shown in Halter with many awards, but not started undersaddle. So the last week of December 2013 we headed off to Ithaca, New York... 1900 Miles round trip. I started him under saddle and we showed in Halter, Western Pleasure, English Pleasure in 2014. Continuing in 2015 we started the year showing Western Pleasure {and winning against a Rider who has Won Top Western Pleasure Award for many year}, and late year entered a few barrel classes. We focused our training to pattern work in the spring of 2016 and hit the shows for Barrel Racing only. He earn Second Place in 1st Division for NBHA District 5-IL, and Qualified to attend the World NBHA World Show in 2017. As well as carry the American Flag at many shows this year. Plan to enjoy the winter months doing Mounted Shooting with him.